Thoughts from the EOM Warriors – Jim on changing it up

“I have been terrible with keeping up my blog since little baby Jack was born in May but thankfully Jim has written a little piece on what he thinks is important when having a personal trainer in London aka Booze town.  These are not my, Tims, words even if I do agree whole heartedly with the first sentence.”

The little man posing (or using his nappy)

You have gotta love Tim! The first session back after my first cheat day, the reward of a month long abstinence from booze for The Macmillian Cancer Trust and ultimately one almighty hangover, and he throws me to the wolves! Well not the wolves but rather Lee Bennett… entrepreneur, savior of the classic action movie (Only The New Breed), British Bodybuilding Champion and more recently EOM’s new physique sculptor.

In one swift move I am completely out maneuvered. My carefully laid plans to get away with a fairly easy going session thwarted! Why? Because I don’t know Lee! Lee is a mystery, a mystery with arms bigger than my thighs (and I’m a bit of a fatty)

Over time training with someone, you start to do two things:

Sure, it seems counter intuitive to try and get out of the very thing you have invested so much time and effort into, but EOM is pretty relentless when it comes to upping the intensity and weights week-on-week and sometimes you feel like you are literally going to die, which is exactly when you develop these bad habits.

But as I say, I don’t know Lee, I don’t know if he likes football and I very much doubt he has a pug. (French Bulldog aka manly pug)

Then there’s your male pride. When another bloke that you don’t know sets a benchmark you feel you have to do it. You can’t let them see the fear. They think you can do it just by looking at you, which means they think it’s pretty easy, which means that they are gonna think you’re a right pussy if don’t do it. So When Lee starts setting up a Deadlift heavier than any I have done before I don’t say anything. The same goes with the Bench Press, 60kg and a personal best… nice. 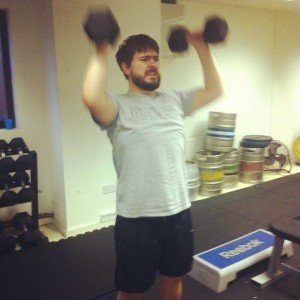 Jim grimacing his way through a bennett special drop set!

Apart from being psychologically snookered by Tim there was also a direct physical benefit from being trained by someone else. Each trainer has a different approach based around their own background, or techniques that they have found successful, even if it underpinned by the same EOM ethos. When it comes to muscle gains its all about regularly “Changing Up”. To quote the higher knowledge

“On this note I better step in and say that you need to keep changing the angles and method of attack when it comes to making drastic and constant improvements to your body over any period of time.  For instance every diet works to an extent until your body gets comfortable and suddenly you find your diet or training working against you.  You have to keep making changes whether its the type of training, weight lifted, tempo of reps, change of energy systems or just being dropped into the hands of an ex British heavyweight bodybuilder who has been instructed to push you to the limit.  Sorry Jim but coming back from a break straight into a PB kind of makes my point.”

Keep your muscles off balance. When they get used to lifting a certain amount in a certain way (sound like your workout?), they stop growing.

This is why Evolution of Man gets results like no other

So where as my training with Tim has been technique and circuit focused over the last 2 weeks, with Lee it was heavier weight supersets alternating between lower and upper muscle groups with drop-sets added into the mix for the final set. Technique was still important, but there was less emphasis on fully extending each rep and more on lifting a heavier weight.

“I have to step in here to say that technique is very important but once you have mastered all your main lifts to the extent that you can just do the exercise with the proficiency of many hours practice a lot can be said for the benefits of being taking to absolute failure.  This may sound like a ridiculous concept but absolute failure is a real term that we use when you can no longer lift a weight up (concentrically) or even lower it (eccentrically) because the muscle have been so exhausted.  Introducing this style of training to a body experiencing a plateau is like adding gasoline to the embers of a dwindling fire.  We do not allow plateaus!!” 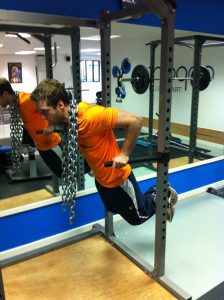 Having not done drop sets I was curious as to the benefits of adding them into a routine. Basically the idea is to train your muscle beyond the point of failure. Just because you can’t do another rep at your set weight doesn’t mean the muscle is totally fatigued, just fatigued enough so that you can’t lift that weight. By dropping the weight you can do more reps thereby overloading that target muscle more thoroughly. The benefits are increased muscle size, strength endurance and can help overcome training plateaus.

Apparently for muscle growth it’s really important to strip off the weight for the drop set quickly as possible, to minimise the time you are not actually lifting weight (no idea why).  Time under tension is very important as it improves local muscular endurance and size.  In as simple terms as I can make it tension on your muscles increases the amount of protein that your muscles will synthesise in order to build more muscles.

All I can say is that the Drop set is heaven!

Jim having a really great time