“Nearly halfway through the program, with new measurements to be taken tomorrow, Jim is looking for ways to enjoy his ever changing body.  Like a true gentleman he’s started researching activities for the rest of you aspiring gym bunnies/geezers too.

There is something about the bench. It’s probably engrained in us from a dozen Arnie/Stallone movies from our youth, but being able to bench a serious weight must be on every blokes’ ‘bucket-list’. Like taking that perfect free-kick (even if it’s just a 5-a-side with your work mates), smashing that little white ball absolutely f@cking miles down the fairway clear and true, or doing the power-slide in a rear wheel drive car – Japanese drift-style! But for me it’s the bench.

So when I started to improve with something on my ‘bucket-list’, even though I am still miles away from where I want to be, it felt great – like next-level great!

It‘s then I began to realise how much being out of shape has affected my confidence.  I don’t just mean in appearance, but generally I’ve become a ‘no’ person instead of a ‘yes’ person, largely because I had no faith in my ability to do physical stuff, and just doing the day-to-day stuff had left me knackered anyway.

So I decided to pick up a few new and old hobbies, but approach them EOM style:

I used to play this a lot in school and a little at Uni, but jacked it in along with most other recreational sports for the pub. It’s a great sport, bloody knackering, but a great sport.  I had picked it up again a few years back and honestly couldn’t finish a game, so this was a great test of my newfound fitness.

Squash includes a complete set of fitness skills including; speed off the mark, endurance, strength and stability and it targets quadriceps, hamstrings, glutes, and Forearms. The aerobic exercise chasing that bloody ball makes it a great workout, but you’re concentrating so hard that you don’t realise you’re done in until after the rally.

Here’s a link to a great court in central, but there are loads of others

This has to be outdoors and away from the madding crowd.  Dodging past grumpy workers on their lunch break is rubbish. I’ve started running at my local park where you can go bare foot if you want to go fully EOM (not for me), but to be honest getting the early morning train to the office and then running along the south bank and embankment is the way to go. I work around Barbican any of these make a good morning run.

This has got to be my own ultimate EOM challenge and definitely on my ‘bucket-list’. I’ve booked it for the weekend 29th of September at Harrison Rocks, which will almost be at the end of my EOM journey. This is definitely NOT something I would have considered doing 6 weeks ago, not just because I wouldn’t have been physically capable to get what I wanted out of it, but to be honest hauling 107kg or 40+% body fat up the side of anything just hasn’t been physically possible. I’m going with one instructor, 6 mates, 3 experienced climbers and 3 novices, so the opportunity to push myself against the experienced climbers is there. 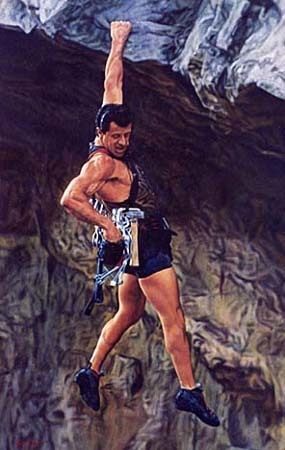 Don’t get me wrong, I appreciate that these are kiddies rocks and this isn’t Cliffhanger, but when you consider the muscle groups being used; deltoids, trapezes, latissimus dorsi, biceps, triceps, forearms,forearm extensors and phalanges, as well as the lower body: quadriceps, gluteus and gastrocnemius, it really is the ultimate challenge for the new healthier, fitter me!

In tests, the intensity of aerobic activity from rock climbing, as measured by VO2 max (a measure of the maximum volume of oxygen that an athlete can use), reached 70 per cent for men and 72 per cent for women – basically a pretty tough CV workout when compared with cycling and running. While the difficulty of the rock face affects the aerobic “oomph” of this exercise – Mens Health

If you fancy having a go check out:

So that’s it, the gauntlet has been thrown. Either you have gone through or are going through the EOM fitness programme. You’ve sweated and trained and now you’ve got the body of your dreams… question is what are you gonna do with it? Or you’re thinking about doing the EOM fitness programme … well take a look at your ‘bucket-list’ and see how many of those things you could actually physically do, even if you had the chance.