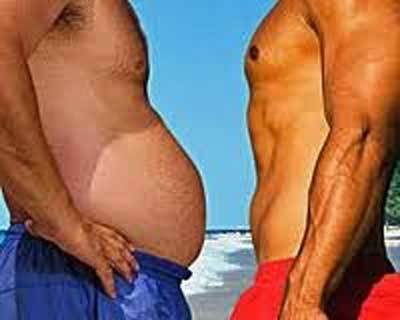 “Before I let you hear from Jim I want to tell you a bit about what he wanted and about the history.  Jim came to me this July after having lost a lot of weight for his wedding in the summer of 2011 when he was a svelt 85.  However, when we did the weigh in the big guy clocked in at 107kg so we definately had work to do.

Now I leave you in Jim’s capable hands.”

Began The Evolution of Man programme today, somewhat fitting as I am currently looking like the missing link!

The session started congenially enough exchanging pleasantries and discussed goals over the next 12 weeks as Tim started taking measurements of my wrists arms, legs, neck and height. By the end I wasn’t sure if we were going to train or get fitted for a suit!

Things took an unsettling direction as I was escorted to the back of the changing rooms to take some ‘more measurements’. From this point on every inch of fat on my body was measured, locating problem areas as Tim explained how the process worked, and how it started off by catagorising the body into three groups: Ectomorph (scrawny), Mesomorph (middle of the road) and Endomorph (stocky, or in may case, fat).

Turns out I am an Endomorph AND an Endomorph with 40% fat weighing in at 106kg! Unphazed Tim began to put me through my paces, starting with dynamic stretches.

Yep this is me!

Then came squat lifts, assisted pull-ups, press ups, and the dreaded dead lifts.  The work out was intensive, reflected by the fact that I managed to tear my cycling shots straight through the crotch leaving the rest of the session ‘breezy’ to say the least.

After a slightly shaky walk back to the office the ol’ endorphins kicked in and the rest of the day has been great.

Having done intensive training before my wedding last year I, had some idea of what to expect, but was really surprised by the technical level of the session, from the reasoning behind each exercise to the quite advanced stretching techniques similar to those used by a sports physio I went to a couple years ago for knee trouble.

I am going to work out a diet plan in line with the one Tim provided later and will let you know how I get on……..