The 12 Days of Fitmas 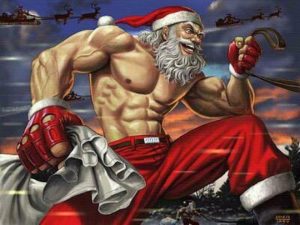 Fitmas? I know, I thought it sounded like a clever play on words but looking at it now it sounds like a dodgy tabloid journalists last ditch attempt at sealing 12 days of publishing opportunity. Aside from just throwing the word fit into the word Christmas I wanted to see if I could convince just one person to walk into 2013 feeling fresh, fit and focused rather that the usual fat, flabby and f*$@ed (needed another F word). At the start of December I wrote the following self righteous Facebook post because I was feeling particularly motivated and wanted to put others in the same mindset:

“The last Monday before December begins and most of you begin to systematically rape your body starting with the liver, kidney and brain before getting involved in destroying any muscle you once had!
How about this year you don’t?? Get on it Chrismas/new year but don’t spend a month destroying your self.
Summer is only 6 months away break the mould and start training now!!”

I thought it was pretty inspired but only my trainer friends seemed to like the idea and we all know that fitness trainers and personal trainers are too boring to spend a month drinking and binging – not true as some are terrible but I’m not going to out anyone now.

So instead I’ve leapt onto the Yule tide band wagon and made it only 12 days for you to focus on going into 2013 a hero rather than an out of shape zero.

The 12 days of Christmas traditionally start on 25th December and finish on the eve of 5th January but I know there is a 0% chance of any one opting for press ups over pudding on the first two days. It is with this in mind that I declare the 12 days of Fitmas to begin on 27th December and finish on 7th January. On each of the 12 days “your true love” (me) will send to you all the steps it takes to get you shaped up in 2013.

I know there’s still New Years to think about which is why the first few days will be just helping you to prepare to begin your battle against the bulge, or manorexia, so you can attack it as soon as recover from the festivities.

Make the decision to start 2013 with a bang rather than a splat by following the videos and posts that I will be sending direct to your inbox every day as the 12 days of Fitmas take you into 2013. If you want to benefit from these tips that I usually reserve just for the 12 week body transformation guys just send your request to me at tim@eomfitness.com. Then later in the year I will be publishing my first book on Mens Health and how to succeed in your own 12 week body transformation so watch this space.