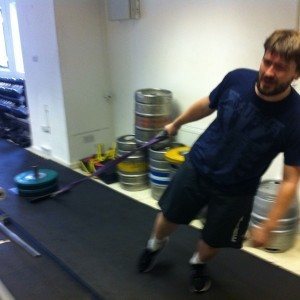 “It’s over! Jim has finished his 12 week body transformation journey and it’s been emotional.  Throughout the 12 weeks Jim has gone from having no fitness knowledge whatsoever to casually chucking out phrases like “my training focuses on alternating supersets….”.  It’s this knowledge that I think is the most important part of embarking on a body transformation regime as if you leave leaner but are not confident enough to keep up the training and maintain your new physique you will have actually done more harm than good.

Unfortunately Jim has been ill a lot over the last week so I didn’t get a chance to take the final photo so I’ll add it to the blog once he shakes it off and gets back in the gym.

Weight lost – 15kg
Fat loss percentage – 14%
Measurements – Waist from 116cm to 94cm whilst most other measurements stayed close to the same only dropping a few centimetres from the chest, arms and legs to give the man a waist!
Jim will agree that his transformation is not yet complete so he will be continuing to train with my guidance over the coming months only to turn up somewhere with a spray tan, bleached white teeth and a massive hollywood smile!” 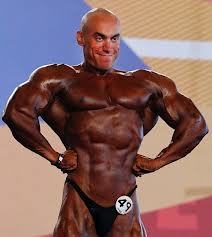 Firstly, sorry for the lateness of this post, but the holy trinity of work, family, and even more work has meant I have stopped and started it almost every day for the last week.

So that’s it, I’ve done it – I have evolved! About 32 years late, but then better late than never eh! It’s hard to accumulate everything that’s happened over the last 12 weeks into a single blog entry so this one might be a bit of a ramble, but I will try and stay on point.

As you may remember from week 10 I had started doing pre-breakfast strength training in an effort to get a savage fat burn going whilst still building the guns. Initially it was a struggle, with fatigue setting in at about the 40 minute mark and affecting my performance. Tim suggested a super food shake as an early morning option, but after 2 weeks of persevering I can now handle a full workout and can state categorically that this is my preferred work out time.

These early mornings sessions also gave me the chance to gate-crash Tim’s new Total Body Evolution Boot camps. Not strictly part of the 12 week progamme, but they fitted in well with my new early morning routine and turned out to be a real pleasure.

The focus was on the same principles as the 12-week programme, with the routines being weights based and intensive, but broken down into pairs (for buddy training) or circuits of 3 depending on numbers. Places are strictly limited to 6 per group. I wouldn’t recommend these sessions to everyone as they are a proper workout and there are inherent risks training this early in the morning (see week 10), but that being said I really enjoyed them! 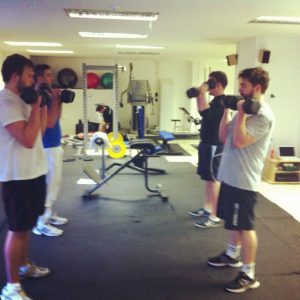 The guys I worked with were either ex-EoM, had worked with Tim before, or had played competitive sport at University level. As such, the levels of fitness were pretty good, and naturally things got competitive from the get-go. With no one wanting to show weakness, I was often forced to hang on for the last 10 seconds in a plank, or fully rep out that last set when maybe I would have given 70% or just plain collapsed, even with Tim’s encouragement, (shouting ;-)). Male pride is clearly a dangerous thing, illustrated impeccably by Gwil, an ex-Manchester University rugby man who puked a fair amount in the first week, but always came back for more!

Tim: Nope, no creatine.
Me: Eh?! But you said that in the last few weeks creatine can be a great ‘plateau buster’ and I’ve been
stuck benching the same weight for the last three weeks!
Tim: That’s because your technique isn’t good enough. Its’ got nothing to do with strength.
Me: Fair enough.

Since week 9, I have been having a go at various supplements, focusing on those that assist weight-loss, rather than muscle gain, but had been quite looking forward to cracking into the creatine (used to build muscle) in my last few weeks. As you can tell, this has fallen on deaf ears, and my report card has been handed back with ‘must try harder #stoptakingshortcutstheydontwork’. Fair enough. The gauntlet’s been thrown down so I’m going to have to beat the bench on my own and subsequently will not be able to share any insight on the benefits of creatine.

I can report however on the supplements I have been taking, which are green tea extract, carnetine and CLA (Conjugated linoleic acids) which all aid in burning fat. As yet I can’t tell if they have accelerated any weight loss, as it takes 4-6weeks for them to take effect, but I can say two things:

1. I haven’t had any issues with a ‘dicky tummy’ or shitting through the eye of a needle, nor have they affected my appetite or anything like that.

2. Supplements are expensive, but still a lot less money than beer, petrol or fags.

So now its time to put my money where my mouth is and answer the million dollar question – have I affected a real change in my lifestyle, or will I be finding myself right back at the bottom of the mountain this time next year?

The last time I did this it was the first time I had exercised in 10 years, and I was in baaaad shape.  It was also leading up to my wedding, and when I was finished it felt good that the journey was complete. This feels very much the other way round, in that I am actually just at the beginning of my journey.
Doing this programme I got the body that I wanted, 100%.  Accept this isn’t the body I want any more…..now I want a leaner, meaner, better body.

So I have joined a gym that has centers near my work, my London home and my hometown, so wherever I am I can get an hour in. I have my weekly routine worked out where I split the week over weight training, kettle bell circuits, dirty circuits and rumble circuits.

My weight training focuses on starting with alternating supersets moving from lower to upper muscle groups, but starting with the big ones and working down to the small. Then I focus on a specific area; either back, chest, arm or legs, mixing up exercises I know with new ones out of Men’s Health or off the net. Then I finish with some functional compound exercises and sprints.

All the gear, no idea

One of the greatest luxuries of working in a PT gym is that all of the thinking, organizing, and spotting is handled by someone who knows exactly what they’re doing. And everyone there is serious about exercise. In the short space I have been attending my new gym, I have had to wait for machines and share equipment between sets. I don’t mind this, except when it’s because you have some knob-head sitting on a bench nursing some weight between his feet whilst he sends a text, just so he can pull off 3 f*cking reps and leave without even breaking a sweat.

OR you get people bouncing from weights to machine to bike and not even manage to actually do any exercise… sure they look great… all the kit, but honestly what are the playing at? 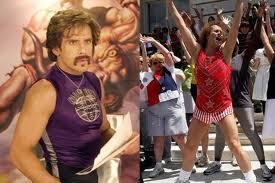 SO my advice is ditch the year long gym membership, forget the £150 training shoe with built-in pace/heart/distance monitors, forget the latest air-tech-light-weight-hypo-bloody-allergenic bollocks and spend your hard-earned money on something that actually genuinely works. Go on! You know it makes sense.