“Week 8 and Jim was a little disappointed at not achieving the weight loss we wanted this week bt on the plus side (as the photo I took and promptly deleted off my camera showed) Jim’s muscles are starting to show through.  I was more happy about seeing the “guns” starting to show than I would have been seeing the number on the scales look smaller which is what this is all about.  Who cares if you look better even if your scales have not changed.  When was the last time you carried your scales on to the beach and let everybody check them? That’s right it doesn’t happen. It’s all about looking good, feeling good and most importantly being told you look good…..”who me? Thankyou I know” Ha Ha 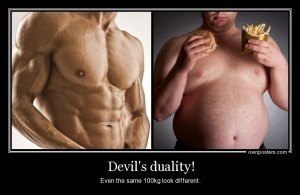 Two people weighing the same can look massively different so never live by the scales.

The Good the Bad and the Ugly – Week 8 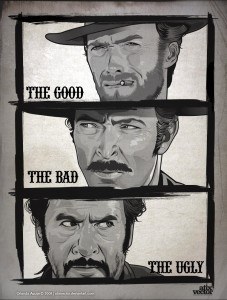 All right bit of mixed bag this week gents, the good the bad and the ugly.

Starting with the good – I am now into the second proper week of lean gains.

I say proper, as I have found the weeks sort of roll into one another with this
routine. This is mainly because your days off are split up, with 2 days on, 1
day off, 3 days on, 1 day off and then you back to 2 days on, but it feels like a
continuation from the week before.

So far I have found two things: i) this shit makes your muscles GROW! My quads
looked insane after day 2, week 2 – literally sticking (I am not gonna say bulging,
it’s far too easy to get misunderstood) out of my leg, and my legs are pretty
stocky as it is! In one week I have had work colleagues, in-laws (quite chuffed
about that one), the wife (toughest one out of the lot, but then she has seen me
naked more than most) all saying I’m looking really good.

Fair enough this is a culmination of 7 weeks, but it can’t be just coincidence,
right?

ii) You start cheating after week one! According to Tim the tempo of these
exercises is the key to whole thing… I mean freakin’ pivotal! It so easy to start
dropping the trap bar in 2 seconds instead of 3 and start repping it out like a
regular exercise, particularly when the weight goes up, even by a small amount.

But it’s that extra second that generates the growth hormone, which is the very
thing that seems to be getting me compliments! Luckily my drill sergeant (Tim)
doesn’t let me get away with it for too may reps.

Right, so the Bad:

This could be any week really, and this one’s just for the endomorphers (you
know, like the Power Rangers) out there.
This week my weight went up, in fact I missed my target weight by a whopping
2kg.

The reason? More than any other body type, us lot are know how to eat. When
the rest of you have turned away with the meat-sweats, we are thanking God that
we went against convention, and the wishes of our better halves, and DID wear
joggers to that posh French restaurant that she has selected especially – much
more give you see. Go buffet or go home, that’s our motto.

So my portions, although healthy and protein based, have been steadily creeping
up. My home cooking has got more ‘buttery’ and I have started to graze… it’s
meat grazing, but it’s still too much.

And why has this happened? I stopped filling out my food chart, I took my eye
off the ball. I just had my first measured chicken salad in about two weeks and it
was literally HALF the size.

However, one of my fellow ‘Warriors’, Swapnil, who was also in the ‘big man
category’ has absolutely smashed it (sounding like Tim again – sorry). I mean it’s
un-f%@king-believable what this dude has done. I walked pass him in the gym
the other day I didn’t recognise the guy. No jokes

So stick to the programme, ALL of it! Swapnil I salute you. “If it’s okay with Swapnil I’ll put his final photos on Facebook next week when we take them but it’s gonna be good”

(insert photo of Tim) “As if.  Tim is as handsome as he is powerful”